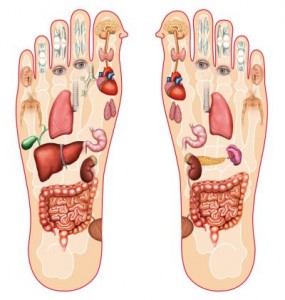 The origins of reflexology can be traced back may thousands of years. Many civilizations and cultures have used this ancient form of healing throughout history. The main principle of reflexology that has evolved with time and research is that the feet mirror the body.

In the early 30”s, Dr Riley had a physiotherapist in his office called Eunice Ingham. Dr. J. Riley taught the reflex technique to his wife Elizabeth and Eunice Ingham. Eunice Ingham became engrossed in zone therapy. With the aid of visiting Chinese doctors, who gave her documentation illustrating how the Chinese perceive the feet to mirror the body, she started equating areas on the feet with the anatomy of the body and drew up detailed foot charts.

Eunice Ingham’s work became more and more reflex based but, confusingly, she continued to use the term “zone therapy” for some time. She found that not only did “zone therapy” relieve pain but it also promoted healing. Over the course of her work she changed the term from “zone therapy” to “compression massage” and finally settled with “reflexology“.

Benefits of reflexology include:

When we are stressed our body’s defences break down and we become more susceptible to illness and disease. Reflexology can assist in reducing stress by generating deep tranquil relaxation, helping the body balance itself and allowing healing energy to flow.

Blood needs to flow freely throughout the body carrying oxygen and nutrients to all the cells and removing the waste products of metabolism and other toxins. By reducing stress and tension, reflexology allows the cardiovascular vessels to conduct the flow of blood naturally and easily.

Reflexology stimulates the lymphatic system thus reducing risk of infection. It cleanses the body of toxins and impurities and also stimulates the production of endorphins, leading to an improved immune system and sense of well-being.

Reflexology revitalizes energy throughout the body by relaxing and opening up the energy pathways.

Relief is only an appointment away. Call 403-301-3730 to arrange a reflexology appointment.